Why Are You Apologizing For Existing?

Recently a Twitter friend of mine asked me a question that stopped a negative perspectives on it’s tracks.

I was apologizing for not sending over some information based on a tweet she made and battling the creeping imposter syndrome feeling of not being good enough.

Next thing I know, she asks me, “Why are you apologizing?!”

My response was literally, “Honestly, I don’t know and now you’ve made me realize I’ve probably been apologizing for existing.”

Truth is that subconsciously I was feeling sorry for existing and frankly wasn’t sure why.

But then she adds that there are far worse things happening in this world and it wasn’t so much about the deliverables but the conversation.

In one small moment, I saw a rare glimpse of humanity that I wish existed in more areas of life.

If you’ve ever been late to work, a meeting, or a special event because life had other plans, this one’s for you.

Take a moment to breathe and remember that you’re human, with responsibilities and emotions.

That baggage you’ve been carrying that makes you feel as if you need to apologise for your existence, it’s time to let it go.

If you know you’ve been doing the things to move the needle forward, it’s ok to acknowledge that.

Sure I still felt bad about things but I also felt human.

Surrender to the core inside that seeks to make a difference, the core that pushes beyond feeling jaded and into feeling victorious.

Because you’ve carried the dream this far, why would you turn back now?

Get real with your humanity and embrace your mortality.

The fear shouldn’t be of failure or even death but it should be of not living fully.

If anything, the only apologies you should be giving are to yourself for not being more forgiving and empathetic to yourself as well as to others.

Life is too short to be living afraid of your own shadow.

You’re way better than that.

In fact, your important in the grand story of moving humanity forward.

So change that thinking process.

Stop saying “if” when talking about your goals and dreams.

Speak from a place of faith and say “when” instead.

Watch the change this makes in how you execute.

With just one simple word change, you’ve moved yourself from a place of wishing, to a place of intentional action.

Thinking from a stance of “if” leaves things open ended while a stance of thinking that involves “when” forces you to determine exactly when will be.

Chances are with such a change in mindset, especially when practiced daily, will make you feel better too.

Take some time to make a list of the things you tell yourself.

How many of them are actually positive? Are they mostly negative?

What you think versus the reality may shock you.

Besides, if you don’t know the details of what you’re dealing with, you can’t effectively come up with a plan to improve.

Do you accept you for who you are?

When you accept your origin story, you’ll begin to notice that there were many areas in life that you weren’t accepting of yourself in.

Meaning, imposter syndrome may have told you that you don’t belong for one reason or another, leaving you to wish for greener pastures and happier days.

Yet upon further inspection, you find that your list of accomplishments, experiences, skills and even the community around you say otherwise.

The aspirational side of things is generally fed by your insecurities and often because the “glory days” of the past have been put on a pedestal.

So here we are with the pressing question of, “Do you accept you for who you are?”

Because if you do, then no one else’s success comes at your expense and the only competition that you have in life is you.

I don’t have a large following.

I don’t have enough money.

I don’t have the time.

Often, these are the excuses we feed ourselves when the reality is that the goal or task at hand isn’t truly a priority.

It’s time to starve those excuses and doubts.

You’re capable of so much more than to live a life you’re constantly feeling sorry over.

If today was the last day of your life, would you still be sitting around waiting on opportunity?

You are able to be the person that breaks the cycle of excuses in your world.

Let the naysayers and doubters sit outside.

Your mindset, energy and future depends on it.

If they bring excuses, you bring the solutions.

Your story isn’t about anyone else except you.

There is only one of you, even if you’re a twin.

You can’t stand out while also trying to fit in.

Do you and do you deeply.

So what’s the story you want to share? Is it one that shows a victim or victor?

That’s what it all comes down to, especially when we’re looking down the road at your legacy.

Ultimately the choices made along the way of your journey are all on you.

Show up for your dreams, your choice.

Don’t show up for what you believe in, also your choice.

It doesn’t matter what you have or don’t, what matters is what you choose to do with what you do have.

So if you happen to have the gift of life, experience and the intention to create good, why are you apologizing?

Better yet, what’s stopping you from living like those are things you actually have? 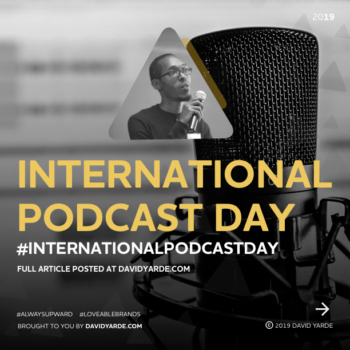 The Notions We Hide Behind