The Notions We Hide Behind

You’ll often hear how someone “manifested” or “visualized” their success.

What’s rarely paid attention to is the long hours and valleys that brought them to that point.

It’s easier to grab hold of a motivational quote or inspirational meme and share it.

With just a few taps or swipes, you can now be a motivational coach, with a few more likes you’ll be an “influencer”.

Now you’re running a rat race to show how awesome you are.

We tell ourselves how successful we’ll be if only we can get a post to go viral.

We make a huge deal about all the awards and accolades yet still end up battling the empty feeling on the inside.

The truth is that in a world where everyone seems to want to be a thought leader or someone in the spotlight, it’s key to have a solid grip on who you are and the things you give value.

Not everything is of equal importance.

Once you establish the foundations that should include basic human rights and respect, everything else has the ability to be a priority that leads to greater progress.

The key is to toss out the notions that hold you back and embrace the ones that allow you to place the right priority on the things to be done.

If you fear change or think that bad things are destined to happen, you’ll never allow yourself to be pushed to the levels of greatness.

However, if your heart is all in on growth, you’ll seek out every opportunity to grow.

Excuses will fall away.

Clarity will emerge as the blur fades away.

Only if you take the time to toss aside the people, places and things that hinder your progress.

Additionally, you have to be authentically present which isn’t possible when hiding behind a false notion of who you are.

We are all biased.

Whether that’s towards people, things or places.

We’re even biased towards our biases.

The truth that we avoid here is that we rarely ever challenge those biases.

What notion are you hiding behind that’s holding you back from aiming upward? 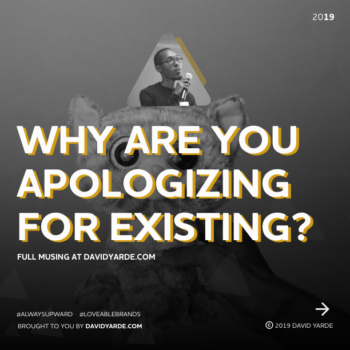 Why Are You Apologizing For Existing?