A Few Things I Learned from Starting a Youtube Channel

A few months ago, I decided to jump into the world of online video. Like my approach with most things, I did my research, calculated all the data, laid out detailed plans, learned about lighting, audio, video search optimization and the list goes on. Until finally, one day I decided to just sit down in front of the camera and talk.

None of my plans went as I imagined they would but I did kept going. I continued to feel uncomfortable as I exposed myself to a new form of creative expression.

Then the moment of truth came. I hit publish.

I didn’t even have a name for this venture, I just knew that if I sat and waited any longer, I would never get around to acting on it.

This process taught me a lot about many of my fears but more importantly, it taught me that my biggest fears were the things I could learn from the most.

Get better not comfortable

Hitting publish wasn’t the beginning of a happy ever after story. Deep down, I knew that it could be better. So I took a look at what the data said, where were viewers dropping off, what about the content could be better?

I was filled with questions that numbers and charts on a screen couldn’t answer, so I found myself asking friends, family and business colleagues for their unbiased feedback. I heard good things, and things that made me a little uncomfortable. In the end, I gained fair better feedback than I would have sitting behind a screen attempting to run tests and tweaking content to see what performs better.

The first part in collecting feedback was focused on things I could improve from the perception of the audience. Instead of asking people if they liked the video or not, I asked questions targeting what they didn’t like.

Following this, I focused on collecting insights from Youtube channel owners of various sizes and stages. This part of my learning taught me that it’s okay to ask for help, especially when starting out in a new area. Furthermore, I learned that things didn’t have to be perfect either.

What mattered is that I started. Otherwise, I’d have nothing to refer to when asking questions about growth, things I’ve tried and gaining insights on what I should be doing.

By asking tons of questions, I avoided hours of time that would have been wasted buying materials in an effort to have things be perfect.

Focus on building a catalog vs trying to go viral

It seems that everyone wants to go viral. Plagues go viral, stupidity also something that goes viral. People, well, you get the point.

As tempting as the articles make it seem that money just falls out the sky with a few videos, the reality is that you’ll be putting in tons of hard work. As with the case of anything that is being built with a focus of value at the center, putting together a video has many moving parts. The view shouldn’t be placed on just one video but on the story your collection of videos shares with the audience.

Even though my second video wasn’t perfect, I published it anyway. I remember that week was a rough one, I didn’t even have time to get a haircut! Why? Because I wanted to keep learning and to share a few things that were fresh in my mind about self care as an entrepreneurial creative.

Don’t take yourself too seriously

This can be said about many things in life that we do and for good reason. We’re often too focused on how we appear to others that we forget who we are when the lights are off.

Life is too short to not enjoy it. Instead of beating yourself up and trying to perfect every little thing, take some time to go outside and get some fresh air, read a book, spend time with family, or travel somewhere new.

[bctt tweet=”Challenge yourself to view the world from the perspective of others.” username=”dsmy”]

Challenge yourself to view the world from the perspective of others. In doing this we open our minds to be more mindful and helpful to our neighbors.

Most importantly, don’t forget to take care of yourself. No matter how many articles you write, videos you produce, podcasts you publish, or interviews you do, there will only be one you.

Curious about where this experiment is headed? Subscribe to the channel! 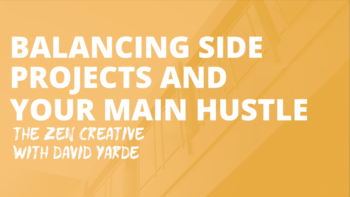